To the citizens of the United States of America…

Based on the worldwide emitted news we are alarmed. Donald Trump’s behaviour makes us fear.

Have we Germans anything to do with the American presidential election? Why does it concern you?, we hear asking you. It concerns us, because we are existentially concerned, as existentially as the destiny of modern Germany ist based on the liberation by the Americans. Without this liberation, where would we be today? We don’t dare to imagine. But just because our destiny is so closely tied to the American one, I take in the representation of many German people the right and the liberty covering position to the election of the American President.

Donald Trump does not know who he is. Everyone should be sure where he comes from, especially a man who wants to become the American president. Who are my parents, who my forefathers? In the German Wikipedia contribution to Trump it is pointed out that he meanwhile confesses to his German origin. It is also said that Trump in 1987 in his autobiographic book „The Art of the Deal“ still stated that his grandfather came from Sweden with which he delated a fiction of his father from the time of the Second World War. So the entertainer simply swaps Sweden for Germany. Sometimes Sweden sells better, sometimes Germany. The fact that there are two different countries makes no difference to him. He could not care less. Trump loves confusions, it belongs to his macabre game that it strikes dizziness and provokes indignation, as in the plagiarism of Michelle Obama’s speech.

Melania Trump repeats not only the words but copies Michelle Obama’s whole performance. Everything speaks for the fact that Donald Trump himself is the author of a lubricating comedy. For what does Melania Trump do? She serves her husband’s directing instructions in a puppet-like perfection. Let’s take a look at the video: She speaks like a robot, the american language she speaks sounds memorized. We do not know a lot about her, but we know she spreads lies about her life story like her husband. „She claimed … she has a university degree, but journalists found that she broke her studies (architecture and design) in Ljubljana to go to Milan and Paris.“ (6.11. Web.de/magazine)

»Spieglein, Spieglein an der Wand, / Wer ist die Schönste im ganzen Land?« „Looking-glass upon the wall, Who is fairest of us all?“
Illustration, probably by Theodor Hosemann (1852), Quelle: wikipedia

My daughter, 17, opened my eyes: „Mama, Melania Trump is a fairy-tale figure. She is Snow White’s stepmother, the evil queen!“

We must think so simply and clearly like the children, we have to go into the world of fairy tales to understand Trump’s play. Let’s look in Melania’s face: She’s envious. She hates the beautiful, warm-hearted Michelle Obama. Melania is also beautiful, but Michelle is much nicer than she is. Donald and Melania hate morality, they are without any moral, but Melania is morally.
Something else makes Melania jealous: Michelle has a nice man. Trump, on the other hand, is ugly, he has only a lot of money. The fact that money can substitute neither for beauty nor for love, Grimm’s fairy tales tell. Donald and Melania Trump would never give a beautiful couple. When she was young, Melania must have heard this fairy tale: „Snow White“. Now she embodies the evil queen. In the fairy tale, the bad queen brings Snow White a poisoned apple. Let’s look Melania in her eyes: She’s spitting poison. And indeed the public is paralyzed like after a snake bite!
By his play, Trump makes both women ridiculous – disgusting! This is not just only contemptible towards both women and degrading – that’s eerie! Was Jarrett Hill, the twitterer, who discovered the „plagiarism“ mediaeffectively, bought from Trump? A terrible thought, but I fear it’s the truth. At first I was irritated myself: Jarrett Hill is young, black, attractive. He has a very nice face, on the photos he laughs. Everyone likes the man, you consider him a follower of the Democrats. Nobody comes up with the idea that Trump could have hired him, but Hill is just therefore the ideal figure for Trump’s confusion play. Transferred to the fairytale „Snow White“, Hill is the hunter. In the fairy tale, the hunter is supposed to murder the Snow White on behalf of the Queen, for she herself does not make her fingers dirty. The hunter does not kill the girl, but puts it out. He does not bring Snow White’s lungs and liver to the evil queen, but the lungs and the liver of a dead animal. This leads the queen to the wrong track.
In our case Trump is the author: In the contrast to the evil queen, he has an audience. He sells us a lie as the truth. He is lying to the American public! Hill shall confuse us, he shall show the people the wrong way.

Jarrett Hill is not an independent journalist. Trump hired Hill to lead us on a wrong track!

I don’t know, whether it is true, but I fear it is.

„I love the poorly educated“, Trump says. Education, he senses, could endanger his play. About the history of the 20th century Trump himself does not know a lot. He does not care. In the German film „Kings of Kallstadt“ he is interviewed in New York and says the following sentence: „I’m proud to have the German blood, there’s no question about it. Great stuff.“ The term „German blood“- this learns in Germany every child – was used in the time of national socialism as a juridical term in the Nuremberg race laws. The fact that no serious politician is allowed to say impudently a sentence like „I am proud to have this German blood …“ is a democratic consensus in the Federal Republic of Germany – a historical achievement! Trump, a descendant of the liberators, uses the language of Hitler. Horrible!

Saying the words „I am proud to have this German blood“, Trump also (probably unconsciously) counteres and makes fun of another sentence, which still means a lot to us Germans today. 22 months after establishment of the Berlin Wall, John F. Kennedy has said in his historic Berlin visit on the 26.6.1963 in front of the Schöneberg Town Hall those wonderful, hope-inspiring, liberating words that assured and deepened the confidence of the Germans in the American protective power: „Ich bin ein Berliner“ – „I am a Berliner.“ These words have a lasting effect in us Germans till this day. In times of the Cold War, J.F. Kennedy was our great political model. Trump makes J.F. Kennedy a joke figure! Incomprehensible!!!

The USA need, as the writer T.C. Boyle said recently during an interview with the „Süddeutsche Zeitung“, „a strict but fair mother – and that she is…

Maybe no candidate before her was so well prepared for this office. Clinton stands for women’s advancement, Multiculturalism and more environment protection – the Republicans stand for nothing: They want to make the rich even richer. I am a convinced Hillarian – the last eight years I was Obamist.“ (SZ online, 21.9.2016, re-translation of me) 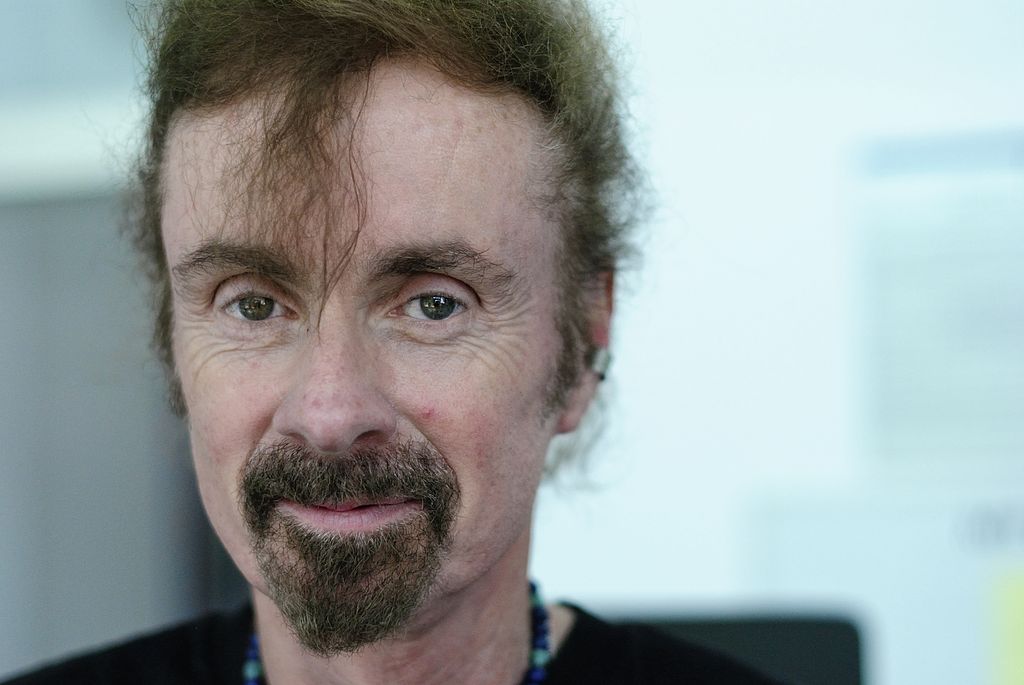 T.C.Boyle 2012 after a reading in Wien, Foto: wikipedia

It is an open secret whom Angela Merkel, Chancellor of the Federal Republic of Germany, would vote: Hillary Clinton. Angela Merkel is similiar to her, the German „Mutti“ saves with emotions, and this is good for us, because she never loses the self-control and never the esteem for herself and the other. Angela Merkel rarely makes us laugh. She is not an entertainer, but serious, well educated and clear. She gives us Germans the feeling of security. We need Heads of State who love people. And that is what she does: „Wir schaffen das!“ – „Yes, we can!“

On Halloween Michelle und Barack Obama invited children to the White House – a warm, friendly gesture. In a very tense situation they danced with the children and gave them the feeling to be sure and rescued: „Everything is good.“

I had to cry, because it was so touching. Thank you, Michelle and Barack Obama. You are wonderful!

How does Trump behave towards children? On the election event in Ashburn he throws a crying baby out of the hall. Later he says it was just a joke. Is Trump a villain? Or is he a coward who does not even stand to what he is doing but runs away and laughs? I think it is still much worse. If you look at the video only exactly enough, you recognise that the story is neither truth nor joke, but a fake. What have I seen? Because I do not understand the American language well, I studied Trump’s facial play and tried to find the moment he noticed the baby. I’ve been looking for signs of anger, traces of compassion, some emotions. But there was nothing, nothing at all. Trump never changes his facial expressions. He doesn’t stop laughing, but his artificial, put on laughter unmasks him. Trump is a good entertainer, but a bad actor. He only knows one role: Joker. The mother with the baby is bought! Trump can only laugh, not cry. He has a heart of money.

Trump hired the baby (who was crying on the election event in Ashburn) to decorate his own entertainment show!

I don’t know, whether it is true, but I fear it is.

Melania Trump comments on the woman-dispising statements of her husband of 2005 during a CNN interview: „Sometimes I say I have two boys at home, I have my young son and I have my husband.“ (According to „Kurier“, Austria) Dear Mrs. Trump, are you so limited or is it a play? Donald Trump is an adult man, he does not reach for a toy car, he reaches for the world power: The world is neither a changing room nor children’s playground, the world happen does not take place in TV. Atomic bombs are no water guns!

Let’s take Trump finally seriously, do we not be fooled by him: He does not just say despising sentences – he despises people. This man is dangerous, because he is manipulative. You may not transfer the responsibility to him.

Dear Mr. NeverNever-President, we say together with Michelle Obama: „Enough is enough!“

We Germans have not been able to get rid of Hitler on our own. Your Americans are stronger. Trust in your power that has made America great: Get rid of Trump!

Go to the election. Your voice is important because it is a historical choice. It is not about „cholera“ or „plague“, it is about everything or nothing, freedom or slavery. Vote Hillary Clinton, Mommy America !!!

Last night I had a dream. Angela Merkel visited me and said:

„My friend Barack Obama is worried about his country and around us all. As a Federal Chancellor, I can not say aloud, whom I would choose. But there is only one choice: Hillary Clinton. Please write your mail. Order the American citizens nice greetings from me. And tell them: „We can do it – Wir schaffen das!“

Merkel and Obama on an fair in Hannover(Germany), 2016 Foto removed